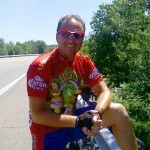 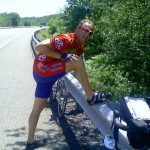 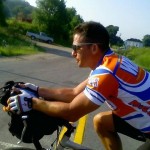 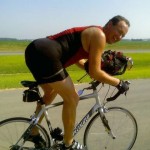 Last night they slept like babies. They had extremely comfortable beds at the Hampton Inn, ordered Pizza Hut delivered to the rooms. After they ate, two seconds later they were asleep.

They left the hotel at 6:30 am and a half mile later, Jay got a flat. Finally resumed at 7 am. They traveled 116 miles and made it into New Jersey.
The first hour was pleasant, but then the climbing began. They were told it was flat on eastern Pennsylvania; not true. William described it as climbing a cliff. Jay’s gone through a bottle of Advil.
They enjoyed Shamokin, PA and went to an old 50s restaurant called Palmers that had girls on roller skates.
They arrived at the Belvedere inn, a 135 year old bed and breakfast house. They were directed to the town Laundromat. They put their clothes in, went to Chinese dinner and when they returned, the washer door was locked. They were unable to get their riding clothes out, so they called the number on the door. A woman came and she said, “It’s broken”. William said, “I know it’s broken! We need to get out clothes out!” She said it still had a 9 minute cycle and the door would not open until it was done. Long story short, they finally got the door open and everything was soaked. They then had to wait for the drier.
Their legs are shot. William’s knees are swollen from the climbing.
They are burning more than 6300 calories a day! They are drinking 500 oz of fluid each day. William’s lunch today was McDonald’s chicken, fries and a 32 oz soda. Then he had another chicken and 2 more sodas to total 90 oz just for lunch.
William said Jay is not a morning person. He starts out slow. By the end of the day Jay is strung out on Advil, feeling no pain and wants to push it. By then, William is tired. He says he was surprised Lay kept up but he is really strong.
Today was 83 degrees and they rode most of the way in the shade.
They got a kick out of seeing the homes so close to the street. They could ride by and look into the living rooms to see what was on TV.
They came to Jim Thorp, Pennsylvania. If you don’t know who Jim Thorp is, do yourself a favor and rent the movie, starring Burt Lancaster, before you see William tomorrow at the bar. He’ll go crazy if you ask, “Who’s Jim Thorp.” He said the town was beautiful.
They think they have 135 miles to go but will know more by 10 am tomorrow. They plan on riding down Broadway in Manhattan after lunch. They are shooting for 5 pm at the bar with the police escort.
They are really excited to near the end of their journey. They’ve done an awesome job!