Seeing OneRepublic in concert is a special experience for most fans, but for one little girl, it truly was life-changing. 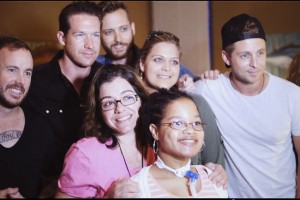 In a video for The Giver ”First Experiences,” a 13-year-old named Torren not only sees her favorite band for the first time, but it’s her very first concert as well.

After being confined to a hospital and nursing home for the first 12 years of her life due to a respiratory illness, Torren has only recently stepped outside … and on this special night, she’s celebrating.

Not only does Torren get to see OneRepublic play — and watch as lead singer Ryan Tedder dedicated their song “I Lived” to their special fan — but she even gets to meet the band.

This project is much more than us creating videos of awesome individuals experiencing something for the first time, it’s about inspiring others to give their own first experiences.