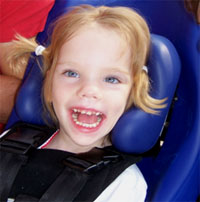 Grace is a 3 year girl who, although born premature, was born in good health. Due to an accident when she was two weeks old, she suffered a severe hypoxic event when her lungs collapsed.

The trauma the lack of oxygen did to her brain was severe. She has Cerebral Palsy, Hydrocephalus ( a build-up of liquid in the brain that has required a shunt that goes from her brain to her abdomen to help drain it), Periventricular Leukomalacia ( PVL is caused by a lack of oxygen or blood flow to the periventricular area of the brain, which results in the death or loss of brain tissue. ), Cortical Blindness, Severe Gastroesophageal Reflux – GERD, a G-Tube, and Seizures. She is unable to speak, crawl, or even lift her head. Her seizures cause her to grind her teeth and she has broken almost all of them.

Grace has been in the hospital for almost 1 year of her entire young life with 3 brain surgeries and 2 abdominal surgeries. She has made an incalculable amount of 911 runs to the ER and most recently was hospitalized for 3 weeks in Manhattan after a 34 hour seizure. While in the hospital in October she had a Nissen fundoplication to help alleviate the severe gastroesophageal reflux due to a weak valve muscle between the stomach and the esophagus.

Because of her seizures she is hospitalized on an almost monthly basis and she will certainly over time need additional brain surgeries to revise her shunt when problems with it occur.

Both of Grace’s parents have lost their jobs since her birth and have done everything possible to make ends meet. The family has incurred approximately $3000 in additional monthly expenses to cover the cost of their health insurance and the repayment of loans taken out to help their daughter. Their 401k accounts and IRA’s have been completely exhausted. This does not include the nearly $50,000 in out of pocket expenses not covered by insurance and the expense of staying with Grace in the hospital in Manhattan on many occasions. With a trip to California for a medical procedure not covered by Grace’s insurance planned for December 2006, they are again faced with how to pay for travel, food, and lodging during the procedure.

Without the assistance of nursing, Grace’s mom and dad have done their best to meet her needs. In the near future Grace will need additional equipment to help her quality of life including a hospital style crib and a generator to keep her equipment functioning during power outages.