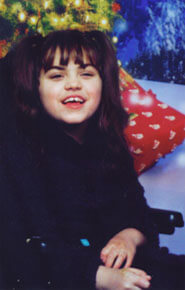 Samantha, “Sammy “is a beautiful 10 years old girl that was born premature and had a major bleed in her brain resulting in severe brain damage causing CP and MR. She also has obstructive sleep apnea, seizure disorder, asthma, occasional central apnea, vision problems, a feeding tube with history of GERD, common variable immunodeficiency, osteoporosis of her spine and hips, acquired hypothyroidism and a history of RDS. Samantha is also in a wheelchair, and wears bilateral leg braces, and requires oxygen and use of a Bi Pap machine to help her breathe when she is asleep. She receives IVIG transfusions every 3 weeks through her mediport inside of her chest for her immunodeficiency for the rest of her life. She is able to crawl, but is still learning how to walk, which is hard for her because she tires so easily. Samantha has had at close to 10 operations in her short life.

Sammy is doing good except for being sick a lot recently where she is having problems with her seizures. She’s very happy despite all her problems. She has a single mom that works tirelessly to survive and improve both of there lives. She recently started working part time as a nursing assistant at the hospital and is also entering her last semester of nursing school. Mom has done everything to survive but her recent part time job has caused more problems and a situation where she has lost or seen a reduction in her public assistance. Her apartment rent was raised over $200 a month. Her rising utilities bills leave her no money to live on. She trys to keep her utility bills down but cannot cut corners with Sammy’s life support equipment. The state has also cut her food stamps from $249 a month to 0 since December. There is no money to pay copays on the daily medications. LIPA has been threatening to turn us off despite partial payments, and the fact that Sammy is on the critical care life support list at LIPA. She cannot work full time because she is trying to get ahead by completing school. The rent can’t be negotiated lower because they live in section 8 housing and its based on the increased part time income. They are getting caught between a rock and a hard place. The mom feels overwhelmed, because she does not know what else to do. She is just trying to take things one day at a time so she don’t PANIC.